Today I went to a magic show with my friend Anna,who I talked about in a different post. The magic man[I called it that because I can’t spell the other word for it] was Adam White. I’d went to one of his shows before,& after wards everybody goes to the library to buy magic props and wands,& I got a wand. The show this year was good,but my favorite part was when I got to be a helper for one of his acts. It happened like this:I went on stage and he had me draw a card from his hand. I drew one & he said it didn’t work. I drew another & he said it was no good! Then he said he’d give me a hint,& he stuck one of the cards up from his hand. I took it,and he had me write my name on it with a permanant marker,& he said,”Careful,it’s Sharpie!,”I wrote my name and he said he was afraid of snakes, so he had a snake named Fang,and that Fang strikes things that smell like skunk. He pulled out his skunk named Kenny,and rubbed Kenny on the card while I held it,and he rubbed Kenny on me! Then he took my card,as well as his deck and put them in the wicker basket where Fang was. He had me hold Kenny while he let Fang out. He opened the wicker basket and out popped a FAKE snake with my card in his mouth! I love his acts!!!!!!!!!!!!!!!!!!!!!!!!!!! 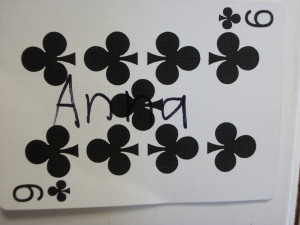 I LOVE CATS!
View all posts by 911girl →
This entry was posted in special events. Bookmark the permalink.